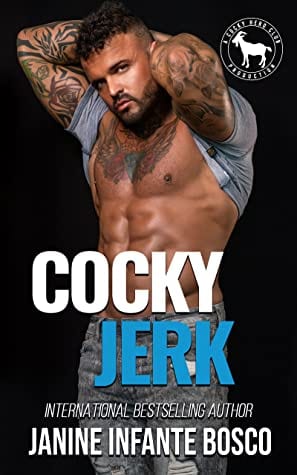 This book had me laughing out loud within the first page.  The description of Antonia’s Monday from Hell is utterly hilarious.  The rest of the book didn’t disappoint.  Antonia and Marco have a kind-of Jersey Shore vibe. They are both tough as nails on the outside, but once you get beneath the exterior, they both crave love and acceptance, the same as everyone else.  But neither of them has ever realized how much they long for it.

I loved both characters, which is a feat, since I didn’t identify at ALL with either one of them.  But despite being so very different from me, I fell in love with both of them.  Marco is kind of a goof-ball, a self-described “mediocre cop”, he reminded me of Joey Tribbiani with more of an edge.  He’s a completely stand-up guy.  Antonia is a firecracker: raised by her dad’s biker club, men who are NOT stand-up guys, she has never really known what it’s like to have any man respect her.  Her dad loves her, but respect – maybe not so much. The most wrenching part of the book was the scene where one of the club members says something horribly offensive to Antonia, right in front of her dad, and her dad doesn’t say one word to stand up for her and put the jerk in his place.  Marco, on the other hand, defends Antonia even at the risk of damaging his career as a cop.   I think that was where I really fell in love with Marco.

Cocky Jerk was a really fun read with some serious elements.  I wasn’t able to figure out how it was going to end, which is always nice; it kept me up late to find out what happened!

There are several other interesting elements in the book – I wanted to learn more about Antonia’s relationship with her mom.  And the relationship between Marco’s cousins Tig and Delia was something I wanted more of.

All in all, Cocky Jerk completely over-delivered on my expectations.  Highly recommended!