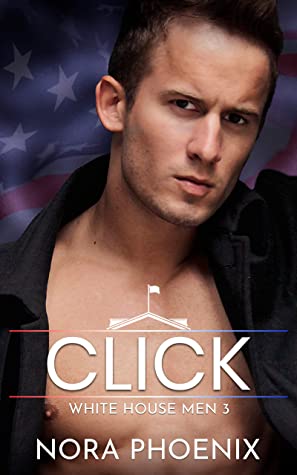 The White House Men series is probably my favourite right now.  I’m a bit of a political nerd, so this series pushes all the right buttons for me!   The series is about several different MM couples, each who gets their own happy ending, but all is told against the backdrop of several shocking acts of terrorism.  We get to see how the terrorism affects each guy a bit differently, how it affects both their personal and their professional lives.  The suspenseful story of how, why and who committed these horrible crimes is stretched throughout all the novels.  I LOVE it.  It’s like the best kind of political thriller with just enough steam to keep it fun.

Book 3, Click,  is the story of White House photographer Rhett and White House Chief of Staff Calix.  This couple is my favourite of the series so far, which is saying a lot because I LOVE all these couples.  Calix is a widower, his husband was killed in one of the terrorist attacks.  Rhett, while he didn’t lose a loved one in the bombing, was deeply traumatized by being there and seeing and photographing the aftermath of the attack.  He was so affected that he became agoraphobic for a period of time, and even 5 years later has trouble being in crowds.  As a result of the time it took for him to process and heal from his trauma, he had never had a romantic relationship of any kind – not even a hookup.  Being a virgin had become a source of shame for him.

When Calix learns of the sweet younger man’s issue with feelings of self-doubt and shame around his lack of experience, he offers to “mentor” him in romantic and sexual relationships.  Calix believes he’ll never be fully over his husband’s death, and so he makes sure Rhett knows he won’t be able to take their relationship beyond “friends with benefits”.

What starts out in Calix’s mind as him doing Rhett a “favour”, ends up being the key to his own healing.  Rhett helps him realize that cutting himself off for the five years after Matthew’s death wasn’t helping him heal.  It was only prolonging the process.  And when he realizes his feelings for Rhett are way beyond what he had planned for, it brings up a LOT of stuff for him.

I’m not sure how many books Nora has planned for this series, but I know I’ll be eagerly reading them all!