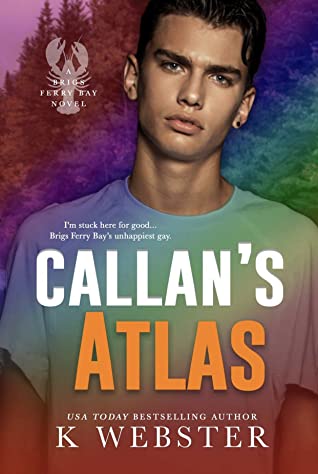 I love the Brigs Ferry Bay series – it has quickly become one of my favorites, and I look forward to each new release!  Callan’s Atlas feels darker than the first two books in the series – even though those have some intense themes too, but Callan and Atlas’ story has a more threatening vibe.  The fact that the powers that be in town are rampantly homophobic features really heavily in this book – moreso than the earlier books.  Reading the scenes where grown men are openly bullying an 18 year old kid isn’t easy.  It was horrifying to realize that these people believed that Callan’s attacker, the man who nearly beat him to death in an earlier book, was the true victim of the crime.  I’m fairly certain there ARE people like that in the world, I’m lucky enough not to know any of them personally, but even so, it was gut-wrenching to read.

The relationship between Atlas and Callan is interesting, they’re both totally broken.  But all Callan really wants is to be treated like anyone else.  He doesn’t want his entire life to be centered around the fact that he was the victim of a violent crime.  He doesn’t want to be “fixed”.  Atlas doesn’t try to fix him.

I had trouble connecting with Atlas.   I didn’t love the fact that Atlas he used his position as a cop to exert power over Callan at the beginning.  Yes, the attraction Callan felt was real, but I get uneasy when someone in a position of authority gets involved with someone so young – Callan is only 18 after all, and Atlas is about 38.

Generally though, the book is a great addition to the series.  Although I must say, I hope the next books are a little bit lighter.