Review: Burning It Down by C. Koehler 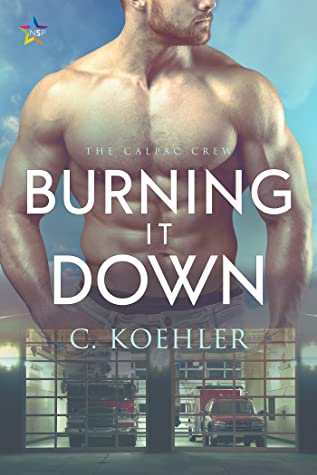 Review: Burning It Down by C. Koehler

After being horribly injured in an accident while on the job, Firefighter Owen Douglas takes up adaptive rowing at the encouragement of his physical therapist to help with his rehab and fight his depression.  He meets soft-spoken veterinarian Adam Lennox there, and it’s love at first sight.

But both men are fighting demons.  Adam has recently left a relationship that was so abusive he had to change his identity to keep his ex from finding him.  After so long in an abusive situation he isn’t even sure he knows what love is anymore.  He brings a huge amount of baggage, and possibly even danger,  into a new relationship.  He isn’t sure this is fair to Owen.

For his part, Owen is fighting lingering PTSD symptoms brought on by his accident.  He is also struggling with the fact that he no longer feels like he belongs at the firehall.  Being the first out battalion chief in the department was difficult enough to deal with without having to deal with the issues brought on by his accident.  He is also realizing that his life of meaningless hookups and no real relationships isn’t what he wants anymore.  An actual relationship – someone to rely on and spend time with becomes his goal.  He wants to build a life and a love with someone, and he thinks he may have found that with Adam.

When Owen learns that Adam’s identity is fake, he has some trouble with it. He feels like the man he has fallen in love with has become a stranger.  And he had sworn off strangers. But then Adam’s ex shows up in their lives, and he understands why Adam had to run and hide.  Jordan is terrifyingly unhinged, and he feels ownership over Adam, which puts both Adam and Owen in danger.   It leads Adam to make some hard, risky decisions.  But Owen refuses to give up on the man he loves, and they earn their happy ending.

Burning It Down was an enjoyable read.  I felt Owen’s anger and frustration towards Adam when he thought he wasn’t standing up for himself.  But I’m fortunate enough to have never experienced being in an abusive relationship, and I can understand how it might lead to decisions others wouldn’t understand.   I did enjoy both characters though.  Both were just broken and damaged enough to be appealing, and I cheered for their happily ever after all the way.