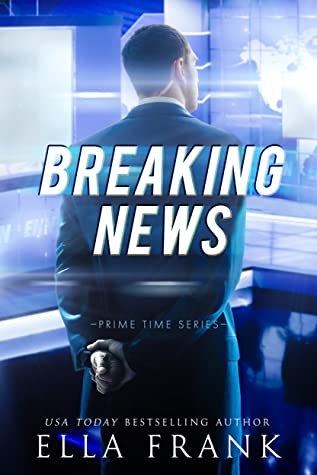 Want to check out the Release Blitz for Breaking News? Click Here

The only thing wrong with Breaking News, book two of Ella Frank’s Prime Time Series, is that it leaves us hanging and waiting for another two months for the final book to come out!

At the end of the first book, Inside Affair, Sean is injured.  Breaking News picks up as Sean is recovering, but while Xander wasn’t physically harmed, he is having a very hard time coping with what happened.  He is dealing with misplaced guilt, believing that he is somehow responsible for Sean’s injuries.  Sean is very concerned that Xander is bottling his feelings up instead of facing them, and he works really hard to try and help Xander through it.

Because Sean had always thought of himself as straight until Xander, I thought we might see him freaking out a little bit while trying to accept his new realizations about his sexuality.  But it wasn’t an issue for him.  He is sure in his feelings for Xander and while he is a little nervous about how things will work as their physical relationship progresses, he’s completely secure with who he is and his feelings for Xander.

This middle book in the trilogy is mostly about watching the relationship between Sean and Xander grow and deepen.  While their physical relationship grows, so does their emotional connection.  They each share parts of themselves that they haven’t ever shared with anyone else.   While it’s clear that their relationship will face more tests in the future, this book shows that they appear to be strong enough to withstand it.  It might be messy and difficult at times, but it promises to be worth it.