Review: Blame It On The Champagne by Fiona Cole 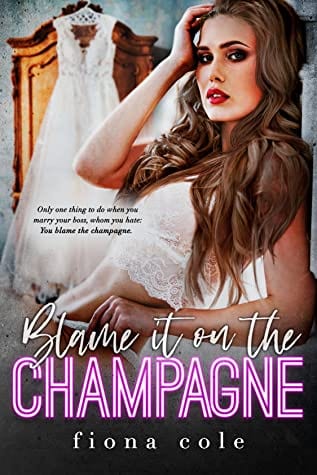 Review: Blame It On The Champagne by Fiona Cole

Vera’s family owns one of the oldest and most prestigious international shipping companies in the world.  She has been raised since birth to become someone’s wife – someone who would benefit the company… an arranged marriage.  She was never encouraged to go to college – although she did anyway.  She always knew her fate would be to marry someone chosen for her.

Nico comes from a shipping background too, but his family’s company was destroyed by Vera’s father years ago, and Nico has been plotting his revenge for many years.

Vera’s family’s company, has gotten itself into financial trouble, and to get out of it, Vera’s father promises her hand in marriage to a business contact.  While she’s nervous about it, she’s willing to give Camden Conti a chance, because she loves her family so much.  But when he turns out to be a horrible person, her father won’t listen to her and he ORDERS her to marry Conti.

Vera instead decides to marry Nico, her boss at the smaller company she took a job at when her father wouldn’t hire her.   She has no idea about the history between their families, and she REALLY has no idea of Nico’s plan to use her to exact his revenge against her father.

I had trouble getting into BIOTC,  because I just couldn’t connect with Vera.  It was only because Camden Conti was a horrible, terrible person, that she refused to marry him.  If he had been simply an okay guy, she would have gone ahead with the marriage, and somehow that rubbed me the wrong way. As the story goes on, we do get to see that Vera is strong, determined and very smart, and she grows up a lot over the course of the book, so the second half was better.

Nico on the other hand is an amazing, super sexy, alpha hero.  He and Vera together are super steamy, and as always, Fiona’s sexy scenes are extra hot.  I liked Blame it on the Champagne, but I think Fiona’s Voyeur series will always be my favourite of hers.  Even so, I’ll be eagerly waiting to read the next book in this series.