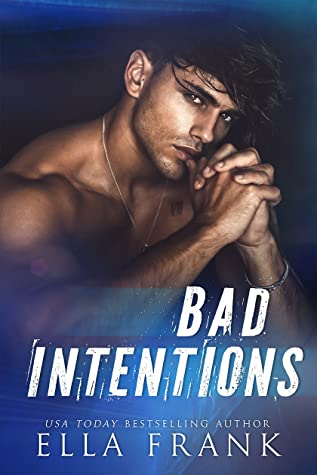 Ella Frank does it to me EVERY TIME!   I get all excited about a new release, and even though I know I’ll have to wait weeks or months for the conclusion of the story, I can never help myself and I have to devour it right away.  Bad Intentions doesn’t disappoint, and now I’m left panting for the ending of Marcus and Gabe’s super steamy love story.

We’ve met Marcus St. James in Ella’s earlier books, he’s the head of ENN News (think CNN).  He’s a mysterious character, cold and calculating, but from where he sits, at the very pinnacle of his line of work, he can’t afford to be anything but.

Gabe is a 22 year old college dropout who, in one stunningly bad decision, decides to impersonate his new boss in order to hook up with Marcus one night.  Assuming it will just be a hookup like any other, and he’ll never see Marcus again, he nearly passes out when he sees the man himself walk into his boss’ office a few days later.

Talking his way out of the slightly ridiculous situation ends up with the two of them spending a ton of time together, and the results are so steamy and just delicious.  It turns out that even though there are 20 years between them, Marcus and Gabe have a HUGE amount in common.  Their dynamic is so sweet. Gabe brings out Marcus’ softer, fun side – a side he hadn’t seen in himself to many years.   But Marcus has a firm belief that he is able to commit only to his career, and that Gabe deserves more than he can give.  So the question remains, once he figures out his mistake, will it be too late for him to convince Gabe how right they are for each other?