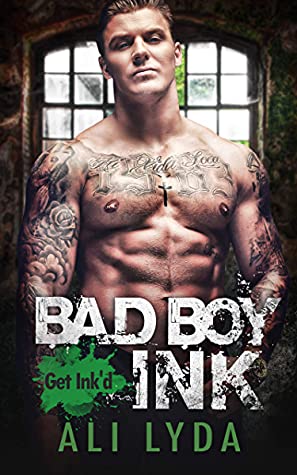 Get Ink’d is one of my favourite series.  I love how the tattoo shop is a band of misfits who have all come together and are a real, honest family to each other.

Bad Boy Ink is the story of Aiden,  and Bryce, the Thor-lookalike, sweet, funny and flirty guy who everyone loves.  Even though he’s got a successful career as a tattoo artist, Bryce’s true passion is computers, and coding.  In his younger days, he survived by hacking, and his goal now is to become an FBI agent focused on cybercrime to catch those black-hat hacker who steal from innocent people like his grandmother.

Aiden is gunning for the same FBI job.  But Aiden is struggling to prove to himself that he’s worthy.  He struggles with feeling like he’s enough since his wealthy parents threw him out at 18 because he wouldn’t live his life exactly how they wanted.

Because they are competing for the same job, when they discover that not only are they in the same forensics class , but they have been assigned as partners for a huge group project, things get off to a rocky start.  Aiden is absolutely adamant that no matter how sweet and likeable Bryce is, he will NOT be distracted from his goal.  But Bryce has a way of breaking down Aiden’s walls.  And soon he finds that he can’t stop thinking about him.

Bad Boy Ink is a really sweet story.  Aiden is so prickly that you just know there’s something more to him.  He fights so hard to stay aloof from everyone, but Bryce is able to get behind his walls and show him what it’s like to actually have someone support him.  My favourite scene in the whole book is when they run into Aiden’s dad.  Bryce stands up for Aiden and it feels so good to have someone in his corner, that’s the beginning of Aiden beginning to fall for Bryce.

Bad Boy Ink is a great addition to the Get Ink’d series.  We also get to meet a new character whose story will be told in the next book, so I look forward to that.