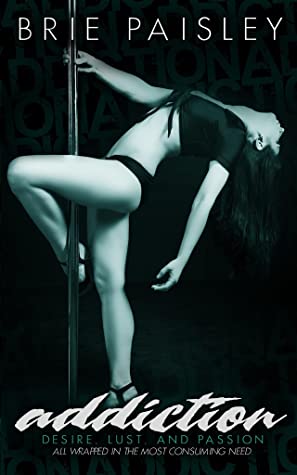 Looking for more info on Brie and a Giveway to celebrate the release of Addition? Click Here

Intense.  Addiction is sooooo intense!  From the get-go Trixie and Sebastian have a compelling relationship.  The first part of the book had me thinking I knew how the story would go – boy, was I wrong!

Initially, Sebastian is a pretty dark character, and I was pretty sure he was going to have some ugly skeletons in his closet that Trixie would have to either  overlook or forgive him for.  But the reason for Sebastian’s inability to trust comes as a huge surprise.  In the same way Trixie’s character does, I started to see Sebastian in a completely different light once his big secret was revealed.  He became much softer and much easier to like, at the same time remaining the strong, sexy alpha. After Trixie learns about his past and he begins to show her what kind of person he is behind his mask it’s easy to see why she’s so attracted to him.

There are a couple of unexpected twists in the book, and by the end of it  we see how strong both characters really are.  And how intense their love for each other has become.  Sebastian becomes a rock for Trixie when she needs him most.  Even when she pushes him away in the most cruel way, he continues to love her unconditionally.