Excerpt: The Anti-Boyfriend by Penelope Ward 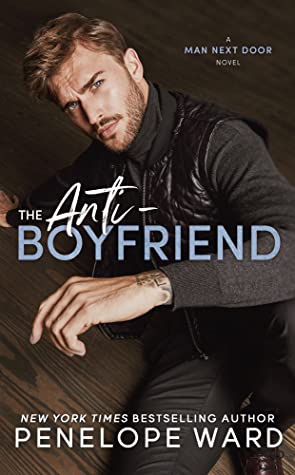 At first, my neighbor Deacon frustrated me.

Sure, he was great-looking and friendly.

But our walls were thin, and on occasion, he’d bring women to his place and keep me awake while he “entertained” them.

As a single mother to an infant, I didn’t appreciate it.

So, finally it was my turn.

When my daughter wouldn’t stop wailing one night, Mr. Manwhore came knocking on my door.

Miraculously, at the sound of his voice, Sunny stopped crying. And when he held her…she eventually fell asleep in his arms.

Deacon was rough on the exterior, but apparently on the inside? Mr. Single-and-Ready-to-Mingle was a baby whisperer.

After that night, we became friends.

But over time, our conversations ran deeper. We got closer.

Until one night we crossed the line.

Our friendship turned into a complicated mess.

I’d gone and fallen for a guy who’d sworn off commitment and kids.

I knew Deacon was starting to care for me too, even though Sunny and I didn’t fit into any plan he’d ever imagined for himself.

He was wrong for me—so wrong that I’d dubbed him the “anti-boyfriend.”

Then why did I wish more than anything that I could be the one woman to change him?

Today, just as I got back to my door, Deacon was exiting his apartment.

“Oh, hey, Carys-Like-Paris. How goes it?” He flashed a wide smile.

When people ask me my name, for some stupid reason, I sometimes answer, “Carys, like Paris,” particularly when I’m nervous. That was the case the first time I met Deacon.

A whiff of his amazing smell put my body on alert. He looked handsome as always. Today he wore a camel-colored suede coat with a shearling collar. His blue eyes, which stood out against his tanned skin, glimmered under the fluorescent lights overhead, which also brought out the copper tint to his otherwise medium-brown hair. He was at least six-foot-two—a beanstalk to my five-foot-four self.

This was my opportunity to bring up last night. But now that he was right here, towering over me, his musky smell saturating the air, I seemed to have lost the words. Still, I was determined to speak up now or never.

My heartbeat accelerated. Here goes. Still out of breath from my sprint up the stairs, I said, “Well, honestly, in answer to your question… I’d love to say I’m doing great, but I had a hard time getting to sleep last night. So, I’ve been better.”

He frowned. “I’m sorry to hear that.”

“Actually, it’s sort of your fault.”

“Yeah. I don’t know if you realize this, but your bed is right up against mine, on the opposite side of the wall. Your…interactions…last night woke me up, and I had a hard time getting back to sleep.”

Deacon closed his eyes momentarily. “Shit. I’m sorry. I didn’t know you were right behind me.”

“Well, that was rude of me. I should’ve invited you to join.”

What? It felt like all my blood rushed to my head.

He held out his palms. “I’m kidding. Bad sense of humor comes out when I feel awkward, I guess.”

Slipping a piece of my hair behind my ear, I brushed off his comment. “I know you’re kidding.”

“Totally kidding.” He smiled. “But I’ll try to be more considerate now that I know you can hear everything. You should’ve said something.”

I tilted my head. “How exactly would that have worked? Barging in on two naked people? That’s why I’m saying something now.”

“Solid point. But I take it last night wasn’t the first time you overheard things?”

“You could’ve banged on the wall or something.”

“I’m not one to rudely interrupt someone’s…personal happenings. I just wanted you to be aware of the situation. We don’t need to discuss it further.”

“Maybe we should come up with a code.”

“Like, If I’m disturbing your peace, you play a song and crank it up to send me a message.” He snapped his fingers. “Something ironic like ‘The Sounds of Silence’ by Simon and Garfunkel.”

“Can’t exactly crank up a song when a baby is sleeping.”

His smile faded. “See? That goes to show you how clueless I am. Clueless and so sorry, Carys. Truly. I’ll try not to let it happen again.”

“It better not, fuckboy!” a voice shouted from behind one of the apartment doors.

Deacon and I turned around in unison. I noticed Mrs. Winsbanger’s door move across the hall. The old lady must have been listening in. She lived alone, and I often spotted her peeking out her door, spying on people.

“Apparently I’m not the only one who overheard things last night,” I said.

His face turned red. His embarrassment was a bit surprising. I’d expected him to be more cocky.

“I’ll move my bed to the other side of the room. That should help.”

“Well, that would be nice, if it’s not too much trouble.”

Happy to have the conversation over with, I let out a long breath. “Okay, well, I’ll let you get going.”

He didn’t budge and seemed to be examining my face. “You okay?”

Well, yeah. I didn’t get good sleep, I’m trying to get things done in possibly the only hour of the day I have free, and we just had the most awkward conversation EVER.

“This is just me—my life. I have what could be barely more than an hour to eat my lunch and have some quiet time before my daughter wakes up from her nap.”

Deacon knew I was a single mom. He’d run into me one day and helped me bring groceries in while I tried to juggle Sunny and her stroller.

I was just about to head back inside my apartment when his voice stopped me.

“Do you need anything?”

I wasn’t entirely sure what he meant. “Like what?”

“Something from the store? A…coffee, maybe? I’m just headed out to run a quick errand, but I can stop somewhere on the way back.”

“It’s the least you can do, monkey balls!” Mrs. Winsbanger chimed in from across the hall.

She was apparently still listening.

“Did she just fucking call me monkey balls?” he whispered.

At that moment, I lost it. Laughter got a hold of me, and it took almost a minute before I could even speak. Deacon laughed, too, but I think he was more cracking up at my reaction.

“No idea why she just called you monkey balls. But I haven’t laughed this hard in weeks.”

After I finally calmed down, Deacon repeated his earlier question.

“Anyway, as I was saying, can I get you a coffee or something?”

His offer gave me pause. It was rare that anyone asked if I needed anything. I had a couple of good friends in the city, but they worked and had busy social lives. It wasn’t like they were around in the middle of the day to run to the store for me. And given that it was fall in New York, it was getting chilly out. I had to have a damn good reason to take Sunny out in the cold.

Honestly, I was dying for a latte from Starbucks. Running to the coffee shop was definitely something people without babies took for granted. It wasn’t worth having to bundle Sunny up.

“I would love a vanilla latte from Starbucks, if you pass one on your way back,” I finally said.

“Just one pump of vanilla would be great.”

“One pump. Got it. Anything else?”

“Isn’t that enough? It’s hardly a necessity. I shouldn’t be taking advantage.”

“Take advantage of me. What else do you need? Seriously. It’s the least I can do after disturbing your peace last night.”

Take advantage of me. Yup. Mind straight in the gutter. “You’re not my gopher.”

“Carys….” His baritone voice turned serious, and he repeated in a slow and exaggerated manner, “What. Do. You. Need? I could run to the store.”

There was something else I desperately needed.

“Okay.” He laughed. “You’re gonna have to help me out with those. I’ve never purchased them in my life.”

Before I could tell him what size, he handed me his phone. I was all too aware of the brief touch of his hand.

“Enter your digits. I’ll text you from the store to make sure I get the right kind.”

I did as he said before handing him back the phone, once again enjoying the contact from that brief exchange. Cheap thrills were as good as it got these days.

He put it in his pocket. “Anything else?”

“Alright. Well, if you change your mind, you can let me know when I text.”

“Thank you. I really appreciate it.”

“Talk to ya in a bit,” he said before heading down the hall.

I stood by my door and watched him walk away. The view from the back was just as good as the front. And moreover, it seemed Deacon was just as lovely on the inside as he was on the outside.

“One pump my ass,” I heard Mrs. Winsbanger say before she slammed her door.

She grew up in Boston with five older brothers and spent most of her twenties as a television news anchor. Penelope resides in Rhode Island with her husband, son, and beautiful daughter with autism.

With over two million books sold, she is a 21-time New York Times bestseller and the author of over twenty novels. Her books have been translated into over a dozen languages and can be found in bookstores around the world.