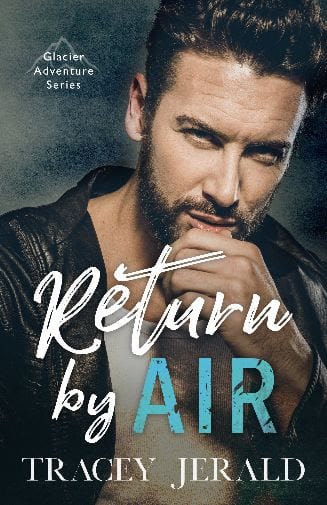 Leaning back against the door, Jennings pulls me in between his legs for a kiss. His mouth descends over mine, his tongue licking at the seam of my lips until I groan, giving him the access he needs. Need, want, and that something else I can’t quite name rise and fall like the plane did this morning. Only this time, I’m flying in Jennings’s arms.

It’s always been this way with him, even when we were so young, I think dazedly. There was so much I just liked about Jennings, and then there was this intense, white-hot chemistry between us. It brought us to a different plane where we both lived for those glorious summer months, where the air and land could touch without catastrophic consequence.

Soon, kissing isn’t enough for either of us. My hands are frantically shoving under Jennings’s shirt. His fingers are playing with the skin of my stomach where he’s pulled my sweater away from my jeans. Tearing my mouth from his, I beg him, “Touch me.”

His eyes promise me everything I want, but his mouth smiles even as he denies me. “I plan on savoring every inch of you.”

I groan as I’m backed toward the bed. Well, Jennings may not be ready to touch me, but I’m more than ready to have my hands on him. Impatiently, I slide his shirt up until it’s bunched beneath his arms. With a smile that’s always hit me low in the gut, he lets me go with one hand to pull it off over the back of his head before tossing it aside. “Better?” he asks.

“Much,” I reply tartly right before I slide my fingers through the hair sprinkling across his firm pecs. Honing in on his nipples, I tweak them between my finger and thumb, hearing him groan aloud. Leaning forward, I place my mouth on the center of his chest and brush kisses over him until I reach my target. I hear his ragged sigh as I twirl my tongue over his nipples before I latch on fully.

“Fuck, Kara. God, yes.” Jennings’s voice is broken as he grips the back of my head against his chest.

I’m scoring my nails up and down his back, fully intent on driving him insane, when he pulls me back to mutter, “My turn.”

I’m about to protest, but I can’t because Jennings is whipping my own shirt up and over my head. Then after my head clears, I don’t have the desire to. He’s letting out a long sigh as he traces his fingers over the delicate lace edging the cup of my bra. With each pass his fingers dip lower and lower until finally they brush against my straining nipple.

I whimper when they finally make contact. Jennings’s only response is to pull his hands away before reaching down and flicking open the clasp between my breasts. I shrug off the offending garment just in time for him to crush our naked torsos against one another.

“So much better,” I manage to get out before he drugs my senses with another one of his kisses. Long moments later, I realize Jennings is bearing us down onto the bed. “Finally,” I mutter.

I feel his smile against my neck. “Impatient little owl. Always so hungry for knowledge.”

Sliding my fingers into his hair, I urge his face back. “You forget I’ve taken this course. I’m looking for a better grade.”

His mumbled “Not sure if that’s possible” sears through my soul in ways I can’t explore right now. Instead I press a kiss to the side of his neck and then draw his head down.

Waves of pleasure course through me as Jennings’s beard scrapes against my skin. God, this is new, I think to myself as I arch into his mouth every time his jaw caresses me. “Maybe I’m not the only one looking to improve his score in class,” I say breathlessly as Jennings draws his chin over the side of my breast.

He just laughs darkly right before he takes my aching nipple in his mouth and sucks. Hard.

“Jennings,” I moan. His eyes snap to mine as his tongue flicks over the tip. “Don’t stop. Feels so good.”

“Other side,” he mutters, shifting to do just that. But his fingers play with the wet nipple he left open to the air. And the sensations have me practically levitating off the bed.

I’m writhing in his arms. My nails drag up his muscular arms, his shoulders, anything I can grab. “Let me touch you,” I plead.

“Let me enjoy you this time,” he counters. My heart trips when I realize he means for this to be more than once. “Let me taste you, Kara. God, I want to wake up with the scent of you on me.”

In this moment, I know Maris was right. I never got over my feelings for John Jennings.