Blog Tour: Semi-Sweet On You by Erin Nicholas 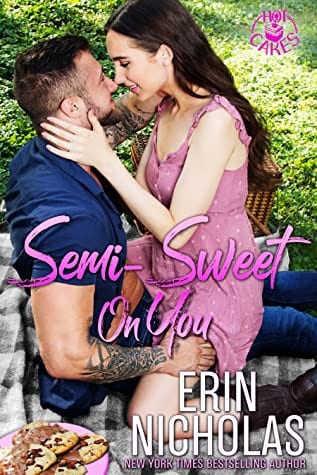 Blog Tour: Semi Sweet On You by Erin Nicholas

Looking for the review of Semi-Sweet On You? Click Here

She broke his heart ten years ago.
Now he’s back — and her new boss.

She broke his heart ten years ago.

And she might still be semi in love with him.

But that’s no problem, right? They can keep it professional.

Until her grandmother gets involved.

She’s thrilled to think that Whitney and Cam are still in love. And invites him to move in with her…and Whitney.

Of course, Whitney can handle that too. Yeah, everything is fine. Just fine.

Until Cam makes it clear that he’s all in.

Having him back is very sweet, but can she really have it all? Or will it all crumble around her?

Add SEMI-SWEET ON YOU to Goodreads: https://bit.ly/2ZDPmVH

He leaned in, close enough that she could feel his breath on her lips when he said, “Let me kiss you.”

“The tea is getting cold!” Didi bellowed from the kitchen.

Whitney and Cam stilled. Then she felt him sigh. But he didn’t pull back. “You going to let me do this or not?”

He was already practically kissing her. When his lips moved as he spoke, they brushed hers ever so lightly. His body heat surrounded her. She swore she could feel his heartbeat pounding. Or maybe that was hers.

They both clearly wanted this. She certainly wasn’t pushing him away or stepping back. But the only actual connection was his hand on her face. And their mingling breaths.

Clearly he was going to insist that she make this decision. He wasn’t going to just sweep her up and kiss the hell out of her before she could protest and then let the chemistry take over.

“Whit,” he said, his voice low and rough. “Push me back or pull me closer.”

She slid her hands up to his chest, not sure until the last moment if she was going to fist his shirt and pull him in or push him away.

Cam, however, didn’t look surprised when she pushed.

He let go and stepped back though. He didn’t seem angry or even frustrated. It seemed that he’d been expecting her reaction actually.

She wet her lips. “Thanks,” she said, hoarsely. And she meant it. She appreciated that he was giving her these choices. Kind of.

It would be a lot easier to just climb him like a tree and give in to everything zipping between them if he’d just back her up against the wall, seal his mouth over hers, and start running his big hands over her body. Then she could pretend she was just caught up in the moment and enjoy the hell out of it without actually admitting she wanted any of that.

She could see it.

He knew that she wanted him, but that she didn’t want to admit it.

So, of course, he was going to make her confess before he did anything more.

Whitney gave him a nod. “I remember.”

“And something you should know about me and the past ten years,” he said, holding her gaze steadily, “I’ve also gotten very used to winning. “

That actually made her heart trip and her inner muscles clench.

See, she should really feel trepidation at that implied promise from him. But she didn’t.

“I’ll keep that in mind,” she said, trying desperately not to act excited about the idea of him trying again and again to get close to her.

He looked at her for a long moment and a thought flickered through her mind—he knows.