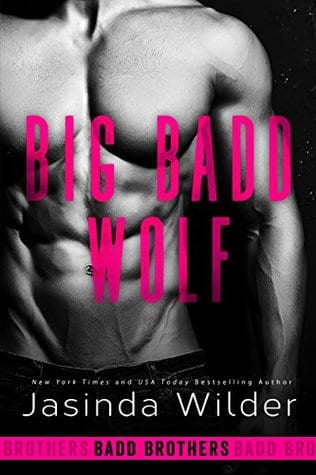 “It’s evident from the first kiss what the answer is—there’s no saving myself, not from the magnetic appeal of her wild, untamable spirit… I’m helpless against this attraction.”

I LOVED this book.  Lucien and Joss’ story.  This one really spoke to me.  Lucien is the second youngest Badd Brother.  He’s smart, but not as smart as his younger brother, Xavier. He’s charming and funny, but not as much as his eldest brother, Bast.  He’s not a star athlete like Bax, or a stunt pilot like Brock, or a lethal Navy Seal like Zane, or musically talented like the twins Corin and Canaan.  He’s just… there.  He fades into the background in the circus of his family.  As a result,  he was the brother who flew the furthest from the coop.  He traveled all over the world, drifting for several years until his dad died and he had to come home to Ketchikan to receive his inheritance together with all the rest of the Badd Brothers.

Joss is a young woman who has faced an enormous tragedy that has completely upended her life.  After the death of her parents, she sets out on foot from Yarmouth, Nova Scotia, and when we meet her she has made her way all the way across Canada and is in Western British Columbia, close to the border with Alaska.  Walking most of the way, and occasionally hitching a ride with a trucker.  She arrives in Ketchikan in a blinding snow storm and, disoriented, she accidently falls off the docks and into the icy waters of the Inside Passage.  By a stroke of luck, Lucien happens to hear the splash, and jumps in to save her.  Joss is quiet and mysterious.  She is utterly overwhelmed by the Badd clan, but the women of the family, particularly Dru and Eva, help to make her feel at least somewhat comfortable.

I couldn’t read this book fast enough – but I really didn’t want it to end.  One of the things I really like about Jasinda’s stories is that the characters seem very real, and in most cases, very relatable.  We see Lucien go through the process of realizing WHY he took off from Ketchikan at a young age: because he felt invisible next to his brothers.  And Joss goes through the process of learning to trust again.  And also realizing that even though she has been drifting for a long time, she DOES in fact want to find a home, and a family of her choosing.  And in learning to trust the Badd family, she realizes that Ketchikan is the home she has been searching for.

The juicy bits in this book are steamy and satisfying.  Joss is innocent and Lucien is wonderful and tender with her.  This was one that I really hated to see end!