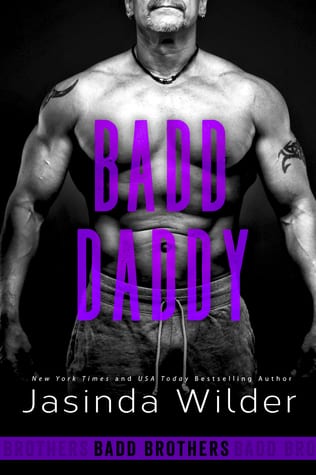 “Like…like there’s a whole lifetime of kissing behind this moment that we’re somehow just now discovering.”

I am SO bingeing on this series right now.  This is the story of Lucas Badd.  He’s the uncle of the original 8 Badd Brothers, and the father of the Badd triplets.  We’ve heard the triplets talk about how their dad was a drunk and didn’t do much to raise them after their mother left.  We also see him in the Seattle hospital room after a bad car accident while driving drunk. Suffice to say that we aren’t given a flattering picture of Lucas Badd, so I was sort of surprised to see him get his own story.  The other surprise is that Lucas is older – he’s 62, and Olivia Goode is 46ish.  I have to admit, this made the story even more intriguing to me – since I’m 46, and most romances are about MUCH younger people – (which is TOTALLY fine, but it’s nice to see a little age-diversity show up!)

Olivia is about as different from Lucas as humanly possible.  She’s younger, gorgeous, healthy, always perfectly dressed, and very well put together.  After being widowed in her early 40s, Olivia comes to Ketchikan to start over.  She’s tired of the East Coast upper-class scene, and wants a more authentic life.

She finds herself drawn to Lucas.  He’s grumpy, vulgar, overweight and clearly doesn’t care about himself.  But something about him attracts her.  They become friends, and she’s honest with Lucas about the fact that if they ever want to be more than friends, he needs to start taking care of himself.

Lucas becomes inspired to try to change his life.  He enlists his sons and nephews to help him with his fitness and diet. He finally faces his past.  In telling the story he has been running away from for 40 years, he begins to heal.   And he begins to repair the damage to his relationship with his boys.  While Olivia gets called out of the country for a family emergency for several months, Lucas uses the time to work on himself.  Of course when she gets home, things pick back up and get steamy.

I really did enjoy this book, the only thing is – I really had trouble believing that Olivia would be attracted to someone like Lucas.  Not only because of the way he looks, but because he is so…. rough.  He’s barely literate, (at one point he misspells the word “here”). He also shuns technology and the world in general – not even having a cell phone that’s capable of texting.   I just couldn’t see how she would be attracted to him.  Also, I didn’t connect with Olivia at all.  She has a habit of lecturing, she’s proper, never swears and makes it clear she doesn’t like it when others swear.  She seemed a bit “precious” to me.

Overall, this book was a nice capper to the Badd family story – and a perfect introduction to the Goode family, the spin off series revolving around Olivia’s five daughters.  I look forward to reading those!