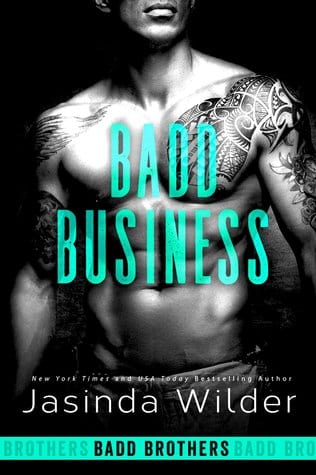 “In my experience, women have three ways of dealing with us Badd boys when we’re being dicks; we either get slapped, or they walk away, or we fuck. And sometimes all three.”

I have to confess that I’m totally bingeing on the Badd Brothers series right now.  I usually read in the evenings and every day I’m spending time day-dreaming about getting back to Ketchikan and the Badd family.  It has been SUCH a great escape!  I’m already on Book #10, and I gotta say, the anxiety that I’m starting to reach the end of the series is starting to set in!

This is the story of the second Badd Triplet, Remington, and Kitty’s roommate from Book #9, Badd Kitty,  Juneau.  I LOVED this story for several reasons.  First, I loved that Juneau is native Alaskan.  I love learning about the culture of the first peoples of North America, and Juneau is proud of her Yu’pik heritage.  I also really loved the fact that she’s slightly on the bigger side.  She’s not particularly self-conscious about her size, but I loved and appreciated the fact that Rem believes she is absolutely the sexiest, most beautiful thing he has ever seen.  It wasn’t a focus of the story, it was just matter of fact, she has a larger butt and big heavy breasts.  In other words, she’s beautiful in the way that MANY women are beautiful.  Naturally .  Juneau is also really smart, but she’s carrying the weight of her family expectations.  They want her to be a lawyer, but in her heart, Juneau is an artist.

Remington appears to be the most sensitive of the three Badd triplet cousins. Although being more sensitive than his rowdy brothers isn’t saying much.  But he recognizes almost immediately when he first sees Juneau that there is something between them.  He is confident, and cocky, but he can also face the fact that Juneau is special, and he never shies away from his feelings for her, even though they scare him. Sometimes it’s nice and comforting to read about a guy who is sure of his feelings from the start – and doesn’t get scared off – or even think about being scared off.

It turns out that they both have a love of body art – tattooing, and Juneau’s cousin is a well-known local tattoo artist, Ink Isaac.  (I’m hoping there’s a book out there about Ink, because I think his story would be fascinating!).  When Rem finds out about Juneau’s love of art and tattoos, it starts a cascade effect which ends with Juneau facing her fear of disappointing her family.  And it’s partly due to Rem’s encouragement.  Her acceptance of her feelings about him actually make her more herself than she’s even been.

This book was a pretty slow burn – Juneau fights her feelings for Rem for a long time, but when she finally faces them – the ensuing love scene, (or juicy part), is amazing.  This is one book where after I finished it, I actually went back and read the love scene again, which I don’t often do.  It was that good.  Jasinda has a way of writing the juicy bits in a way that you can really feel the love between the characters. It’s a good feeling in more ways than one!