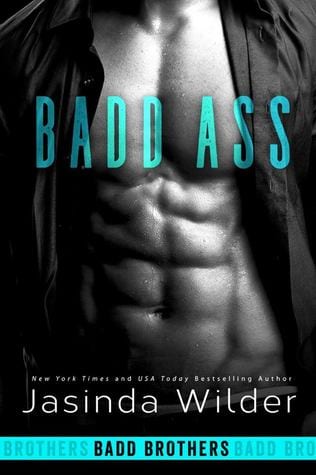 “Figuring out what to do about a woman like Amarantha Quinn will take every scrap of tenacity and courage I possess. Combat is easy, it turns out, in comparison to facing your own fears and scars.”

Book 2 of the Badd Brothers saga.  Zane and Mara’s story is steamy and has a little more angst than Sebastian and Dru’s story did.  I really liked how the story picks up right at the end of the first book.  Although I think it could also be read as a standalone, it’s so fun to see characters we know.  And happily for me, we did get to see a little more of Sebastian and how the brothers of the family interact with each other.

We already know Zane’s background – former Navy Seal, military badass Alpha male. He comes home to Ketchikan, Alaska to help his brothers run their late father’s bar.  Mara is in Ketchikan on vacation, to meet up with a friend who will be in Ketchikan for a few days, and decides to stay the week.

Mara was an Army medic in Afghanistan, so she had obviously seen some shit in her past. Having a father who more or less abandoned her as a kid left her with pretty serious abandonment issues. She’s a tough-talking, no nonsense girl who is strong as fuck, but also has some really high walls built around her heart to protect herself.  Her usual M.O. is to hook up with a guy from the bar, and then sneak our early in the morning before he even wakes up.  Avoids all kinds of awkward situations and weirdness.  But after one amazing night she can’t stop thinking about Zane.

I liked that the characters seemed real -they were both scared and damaged, but they both sucked it up and took a risk.  Even though it was a calculated risk, knowing that she would be leaving in a week, they both decided to put themselves “out there”, at least a little bit, and try hanging out.  Naturally, being a romance book, it turns into more than either of them expected, but the journey there is fun, and while there is some angst towards the end of the book, I didn’t find it off-putting.

I also really liked the part of the story that revolved around Mara’s relationship with her friend, Claire.  Their relationship develops through the book, and Mara discovers that she has been keeping all of her relationships very shallow – not just with men, but even with the woman she considers her best friend.  Their friendship deepens through the book as well.

I enjoyed Badd Ass, but not quite as much as Badd Motherf*cker.  I’m looking forward to the rest of the series.